Reconnaissance is the most important phase in every bug bounty session or pentest engagement. A good recon can make a difference between a successful and failed result. Reconnaissance can be categorized into two: active and passive. One of the methods used during active reconnaissance is port scanning. This method allows pentesters and bug hunters to determine which ports are open on the target hosts or networks, as well as identify the services running on these ports.

However, port scanning always comes with a trade-off between speed and accuracy. During pentest engagements, the tester’s time is limited; while in bug bounties, there is always a race on who can discover and submit the bug first. These reasons force us to prioritize speed over accuracy during port scanning. The drawback to this is the failure to be accurate. With the race against time, we are missing open ports that could lead to a successful pentest engagement or bug hunting.

This research aims to find the balance between speed and accuracy during an Internet-wide port scanning using open-source and well-known tools.

I created MassMap to automate port scanning of large target IP addresses and/or CIDR notations. This tool was based on the result of this research.

Port scanning is one of the most commonly used techniques when doing reconnaissance. This technique allows pentesters or bug hunters to identify open ports available on a host, as well as recognize the services running on these open ports.

The good thing about connection-oriented scanners is that they are more accurate because they can recognize dropped packets.

The most popular example of a connection-oriented scanner is Nmap.

Connectionless scanners do not rely on the completion of the current port being probe to start the next one since they have separate transmit and receive threads. This allows them to do a high-speed scan. However, these scanners are less accurate since they cannot detect dropped packets.

Masscan and Zmap are two of the most popular connectionless scanners available.

For this research, only Nmap and Masscan were included. While Zmap produces good results and a fast scanner, it can only scan one port at a time. Based on experience, Zmap scan is still slow even when multiple jobs are running at the same time.

In spite of the good performances, features, and results that Nmap and Masscan provide, they still have their own weaknesses. The table below shows the PROS and CONS of both tools.

Take note that this is a not detailed comparison between the two tools. Only those that are relevant to the research were listed.

Based on the advantages and disadvantages of the tools listed above, the following solutions and problems were identified in trying to find the balance between speed and accuracy.

The following were formed based on the PROS of the tools:

While the ideas listed above are great, we still need to solve the CONS of each tool. Specifically, we need to solve:

The following subnets were chosen as the target networks for this research:

Only one scanning machine was used during the research due to limited budget. The scanning machine used was a $20 VPS from DigitalOcean with 4GB RAM, 2 vCPUs, and 4TB of monthly bandwidth. Throughout the entire research, this machine only used 1 IP address located at a fixed location.

For this research, both tools have their own test cases which are variations of the different options available in each tool. These test cases aim to solve the CONS of the tools and take advantage of their PROS to find the balance between speed and accuracy.

It’s impossible to cover every variations/combinations of options in a limited period of time, thus only the above were covered.

For test cases which use concurrent jobs, GNU Parallel was used. If you’re new to this tool, please check this detailed tutorial.

This section details the different test cases performed with Masscan and their results.

There’s nothing special with this test case. This is just a normal scan using Masscan but with varying rates.

The following command was used to initiate the scan for this test case:

During the experiment, the maximum rate that my VPS can run is only around 250kpps. This is because the scanning machine does not support PF_RING. 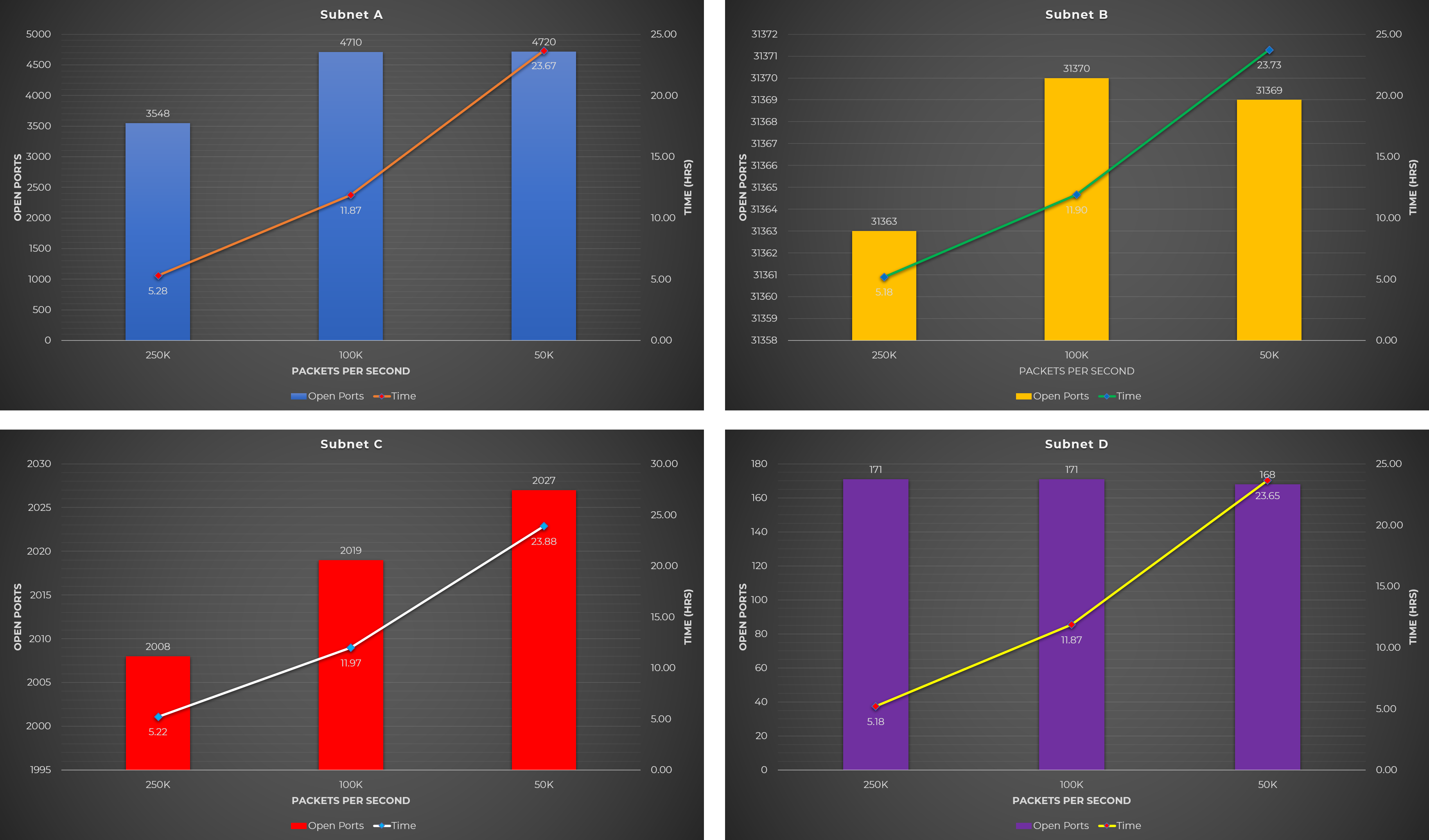 Test Case #2: Split the /16 target subnet into chunks of /20, and run X concurrent Masscan jobs, each with Y rate

To be able to run concurrent jobs, I decided to split the /16 target subnet into smaller subnets. You can split them into other smaller subnets such as /24, but for this research I used /20.

To split the target network into smaller subnets, the following python code was utilized:

Here’s a snippet of what the above code does: 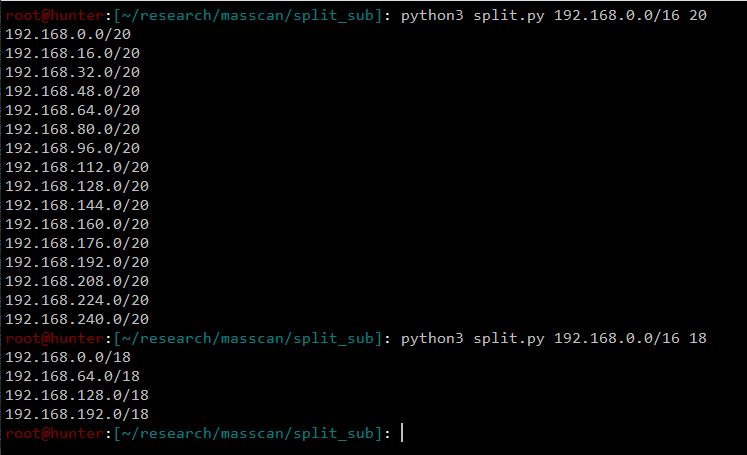 Since the maximum rate of a machine is not “absolute” (not exactly 250kpps in this case), you can set the rate of each job so the total rate would be equal to 80-90% of the maximum rate.

For this test case, the below command was executed. The smaller subnets outputted by split.py were used by parallel as inputs to run concurrent jobs.

Here’s what the above command does when executed. In this instance, 20 Masscan jobs, each with 10kpps rate, were running at the same time. 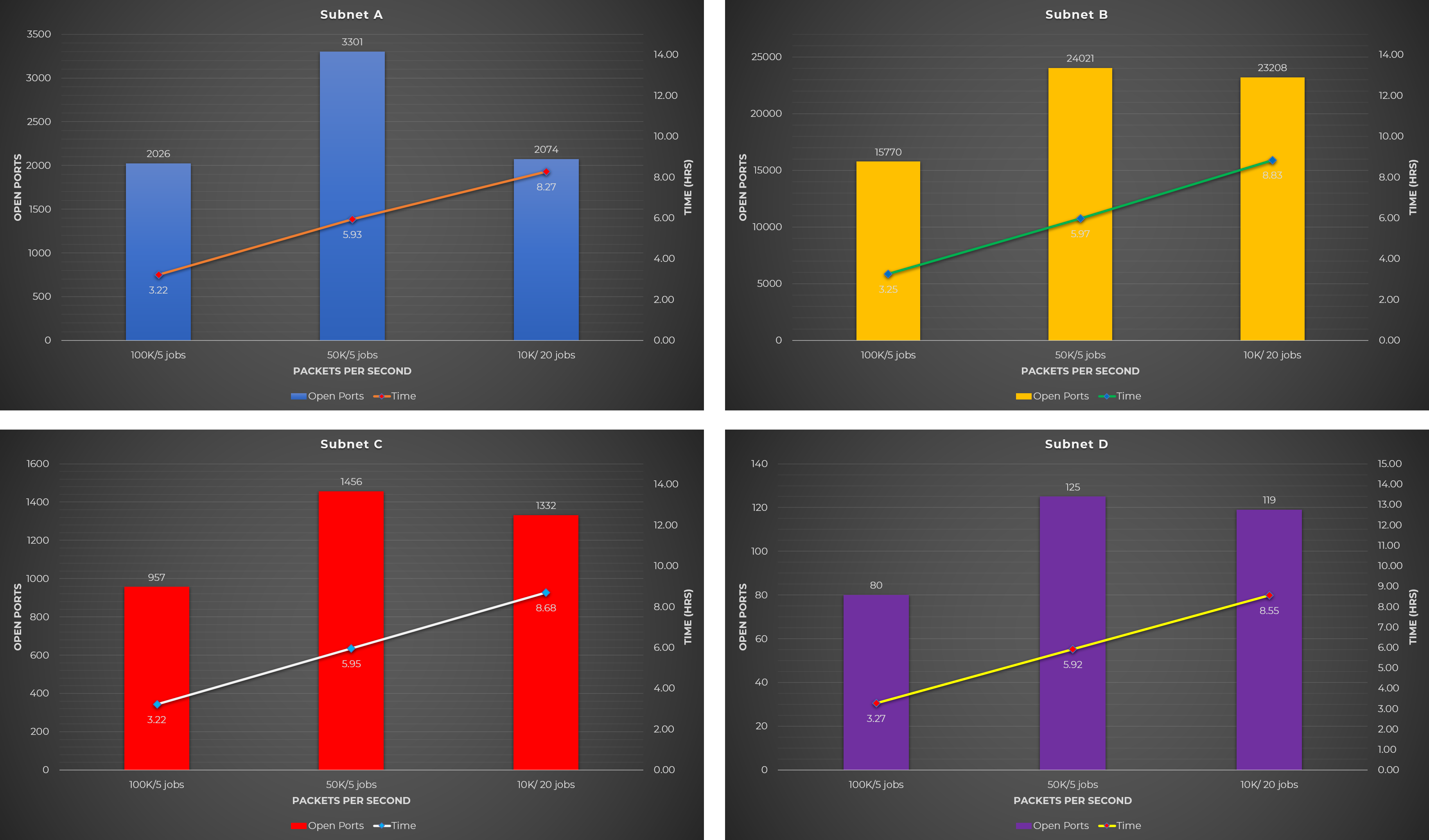 The 3rd test case tries to solve Masscan’s issue when scanning large port ranges, especially the entire 1-65535 port range. The solution that I came with is to split the 1-65535 range into smaller ranges.

Just like in the previous test case, the combination of jobs and rates used were based on the idea of using a total rate of 80-90% of the maximum capacity.

The command below was used to for this test case. The PORT_RANGES contains the list of port ranges and they are used as inputs to parallel for simultaneous tasks.

The 1-65535 port range was split into 4 ways as shown below and each split contains combinations/variations of jobs and rates. 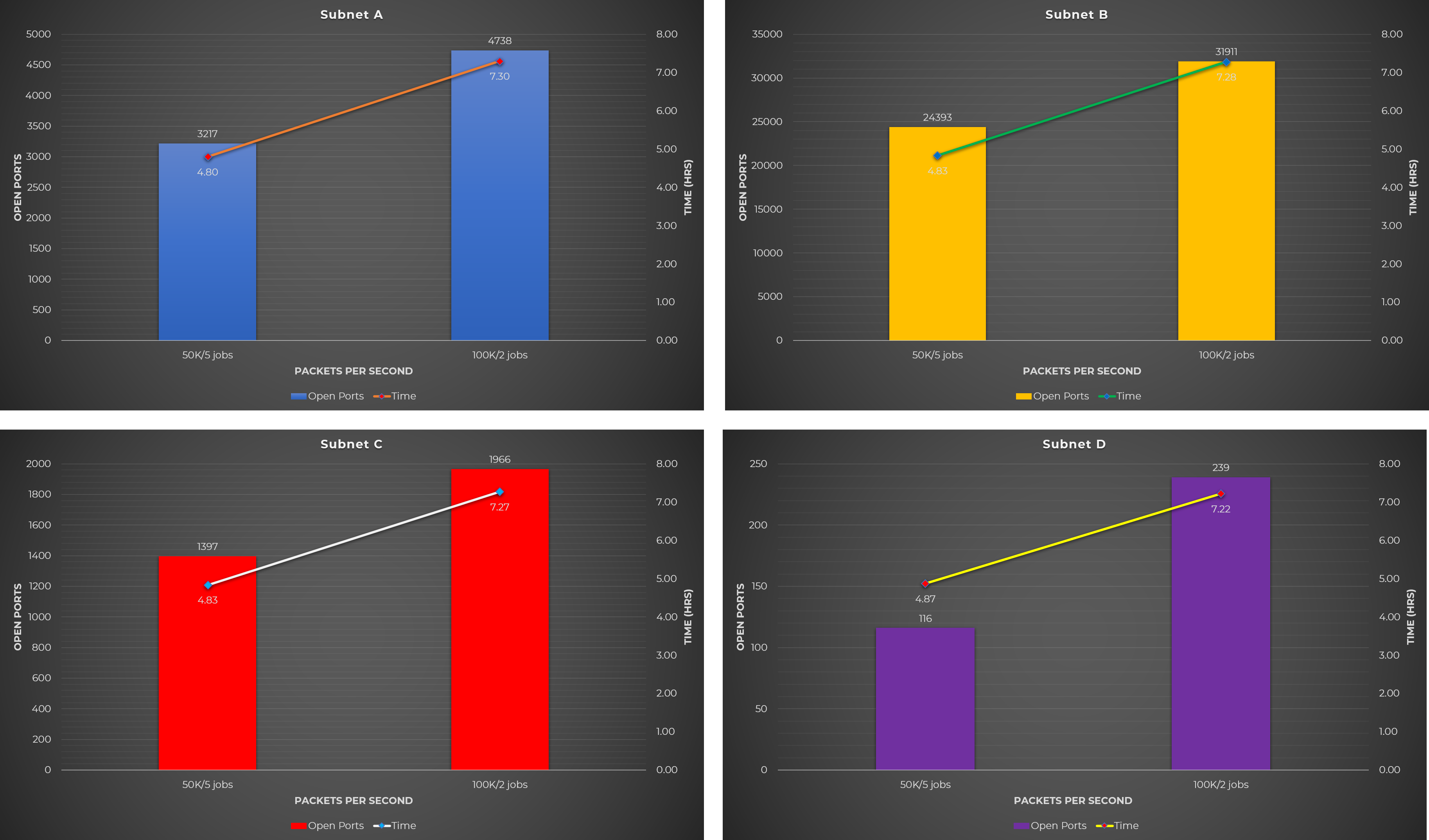 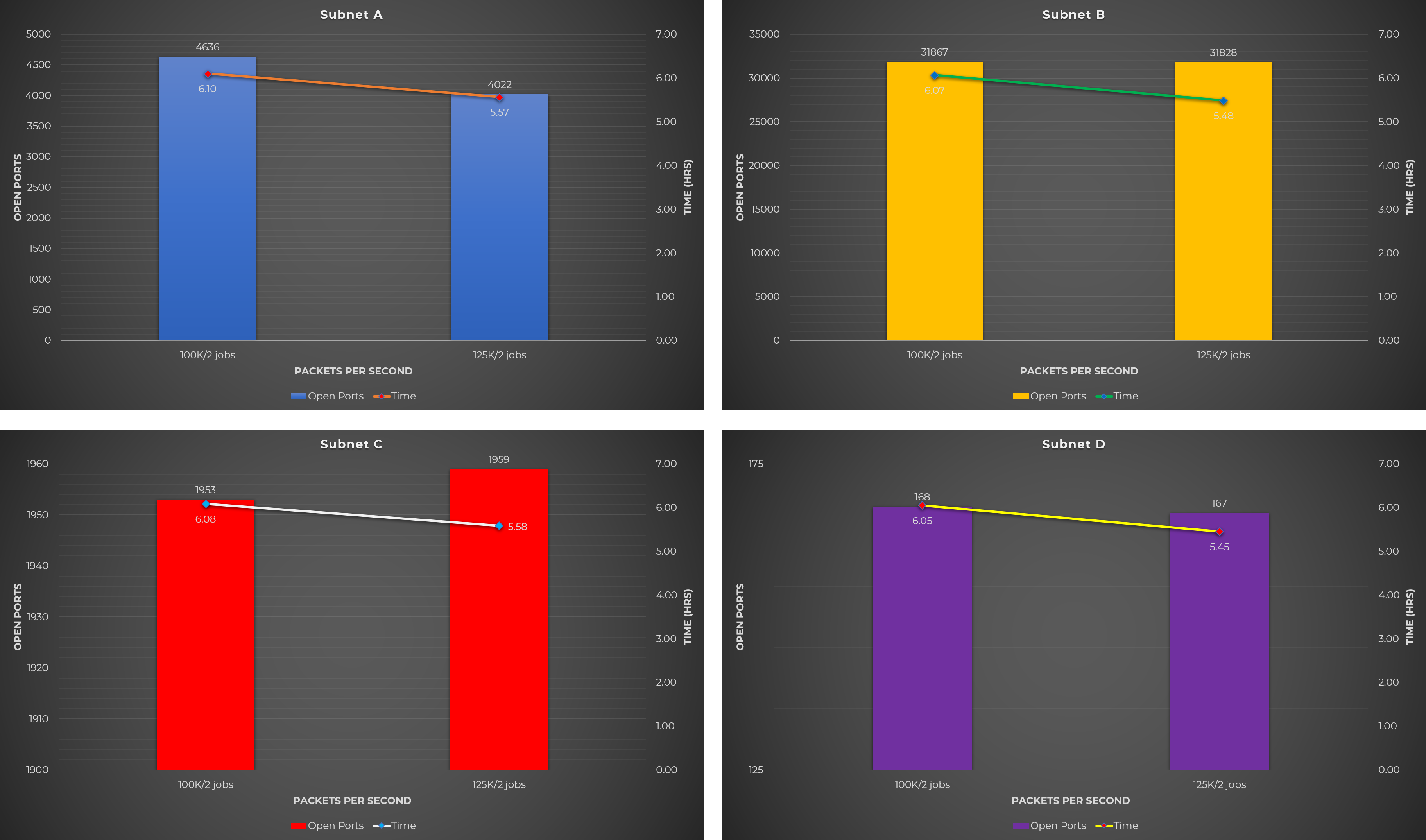 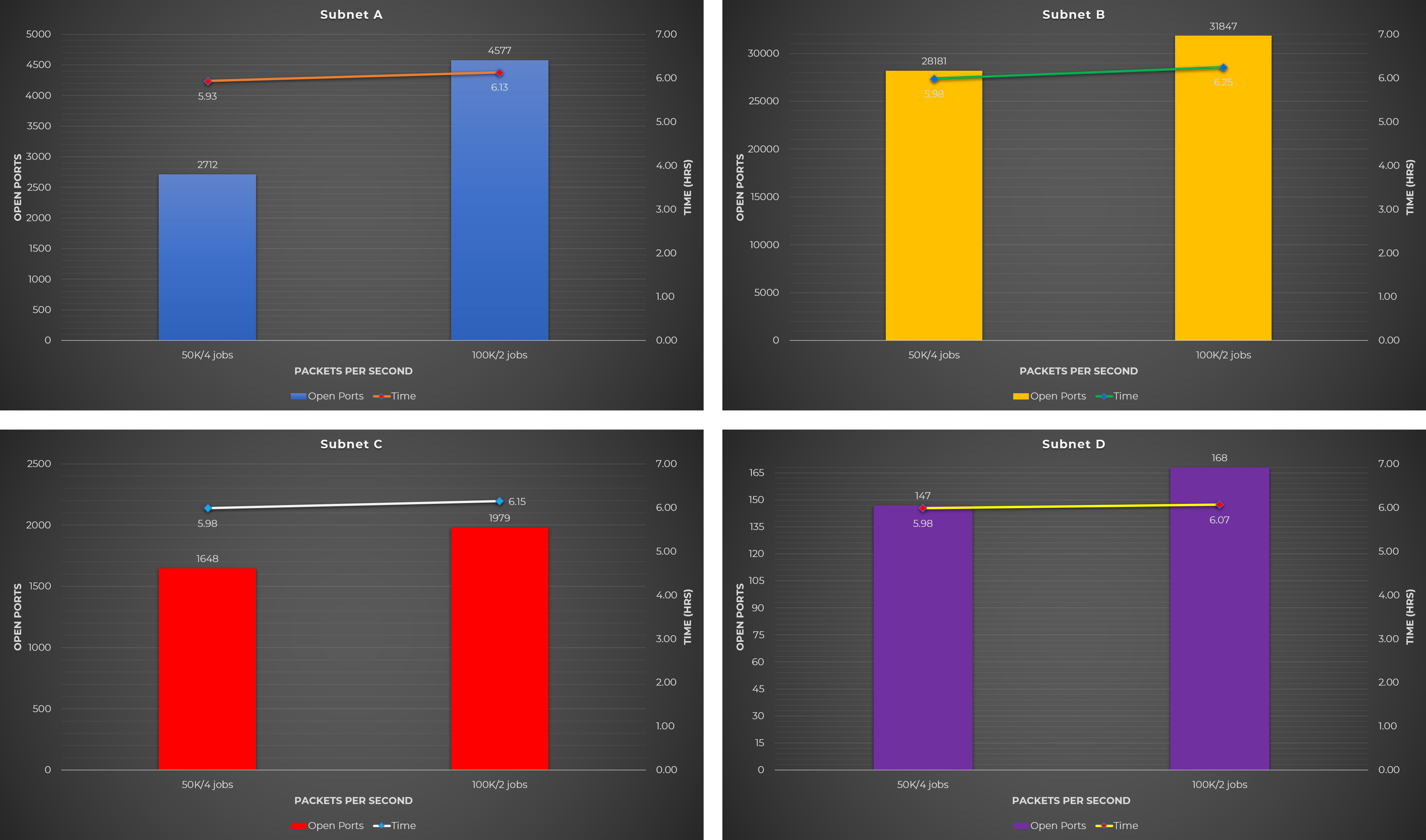 The reason I only used one combination for the 4-port range split was because I realized that I already exceeded my monthly bandwidth limit. As a result, I had to pay $100+ more. 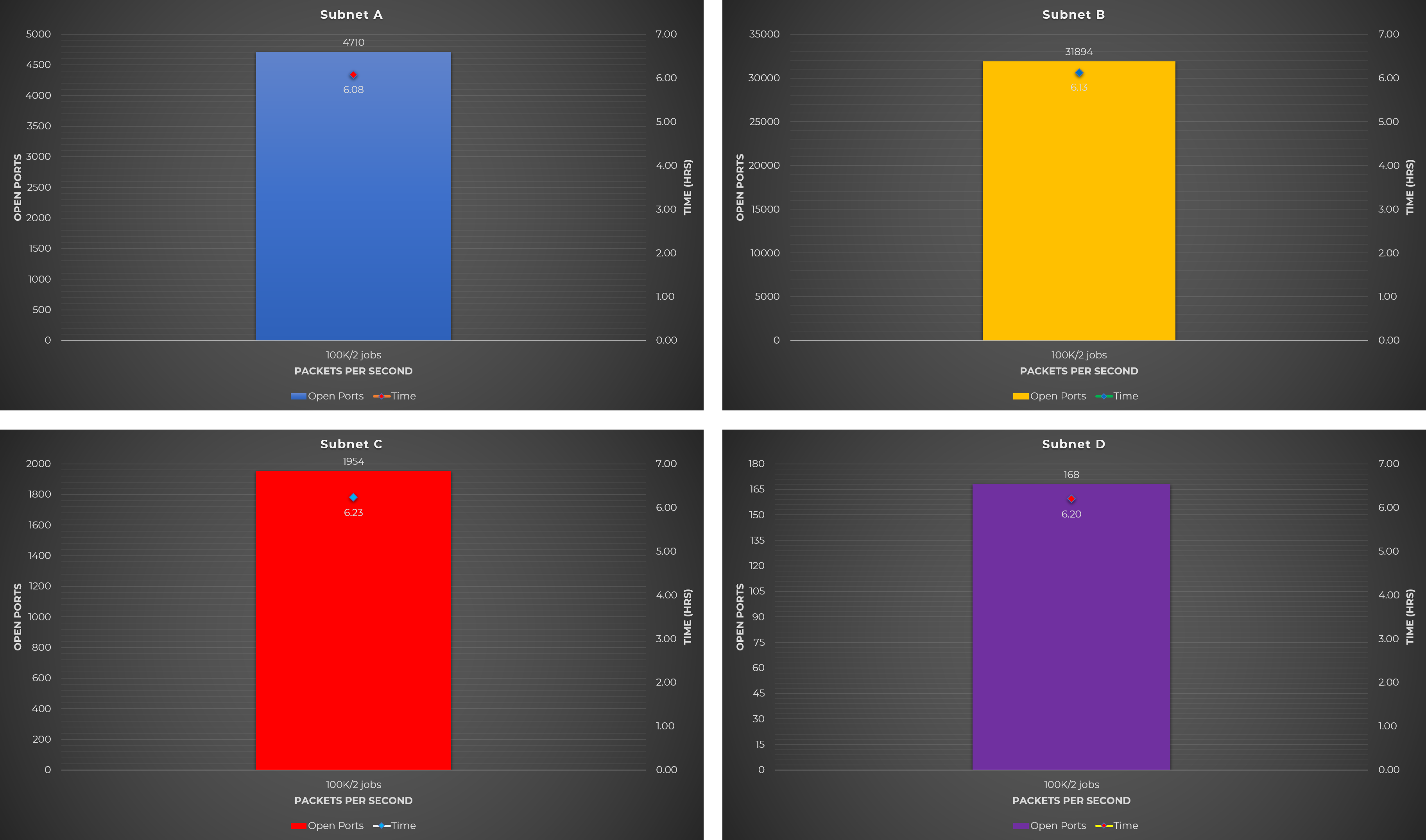 The observations listed below cover all 4 splits mentioned above.

The following table shows the raw data from the experiments performed using the different Masscan test cases mentioned above.

Based on the results from the test cases performed with Masscan, the following were concluded:

In this phase, only version scanning was performed and the use of Nmap’s NSEs, OS guess, and other scanning features were not included. Nmap threads were also limited to T4 which does the equivalent of:

This test case is just a normal scan using Nmap so there’s nothing special in it.

The command used for this test case was:

In this case, I attempted to solve Nmap’s slow performance by running concurrent Nmap scans. This was done by splitting the target subnet into smaller chunks just like what I did with Masscan above. Again, the python code split.py below was used to split the target subnet.

The following shows the command used for this test case:

For this test case, I decided to run two instances of parallel jobs which can found below.

Test Case #3: Scan on the combined list of open ports and hosts identified by Masscan

To get the list of hosts from Masscan’s output, the following command was used:

The following image shows the above command in action. 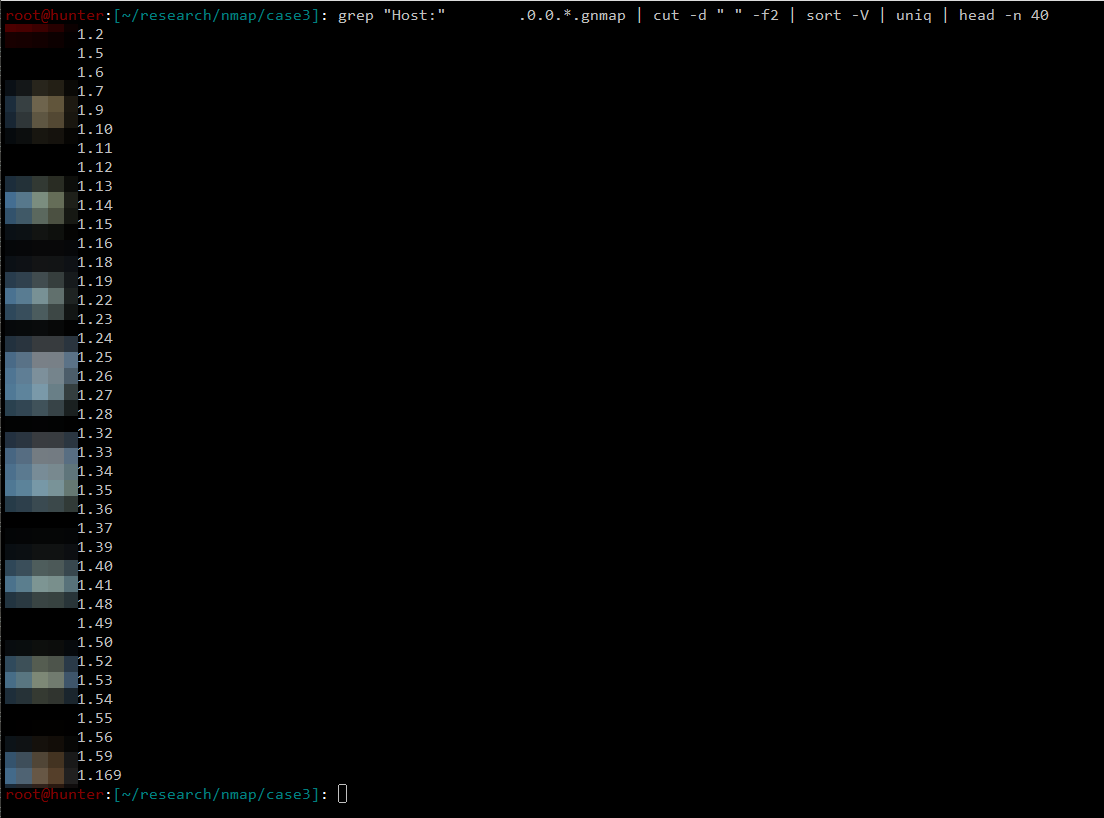 The command below was used to get the combined list of all open ports detected by Masscan.

The following shows the command in action.

This command was used to run a regular Nmap scan.

While the following was used to run concurrent Nmap scans. This uses the list of hosts and combined list of open ports produced by the commands above. 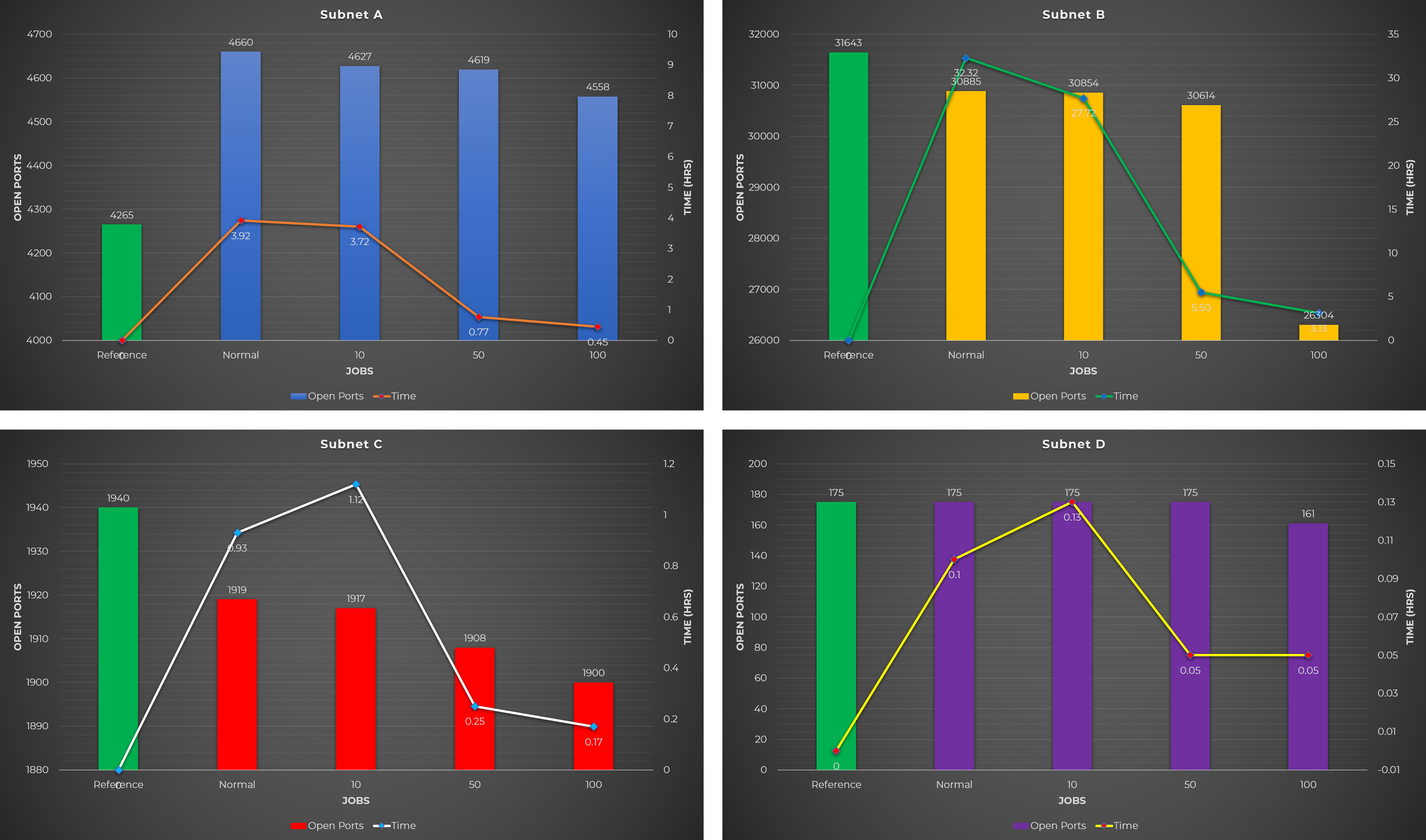 Take a look first at the table below. Let’s say for example that Masscan detected the following open ports (column 2) on each host. The combination of all open ports detected by Masscan will be used as the target ports when running an Nmap scan (column 3).

In our example, new open ports were detected (bold texts in column 4) by Nmap after finishing its scan. How did it happen? Masscan being an asynchronous scanner, it is possible that port 22 was missed on hosts 192.168.1.2 and 192.168.1.3. Since we combined all detected open ports on every hosts and used them as the target ports for Nmap, this missed port (22) will be probe again. The caveat is that there’s no assurance that Nmap will be able to detect it as open as there are other factors that might affect the scan.

The following command was used to get the list of hosts.

Image here shows what the command does. 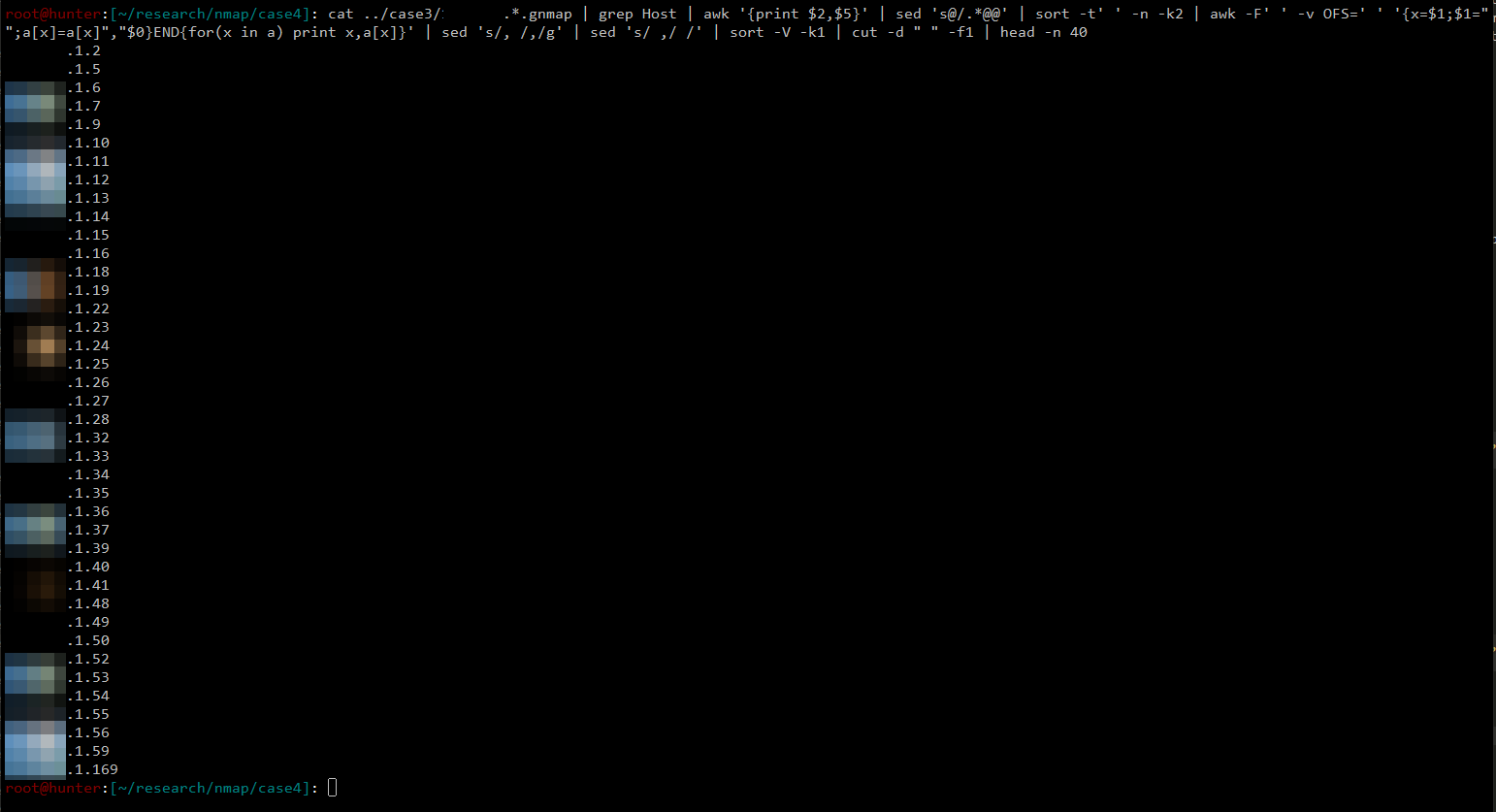 To get the list of open ports from each host, the following command was executed.

Here’s what the command does. 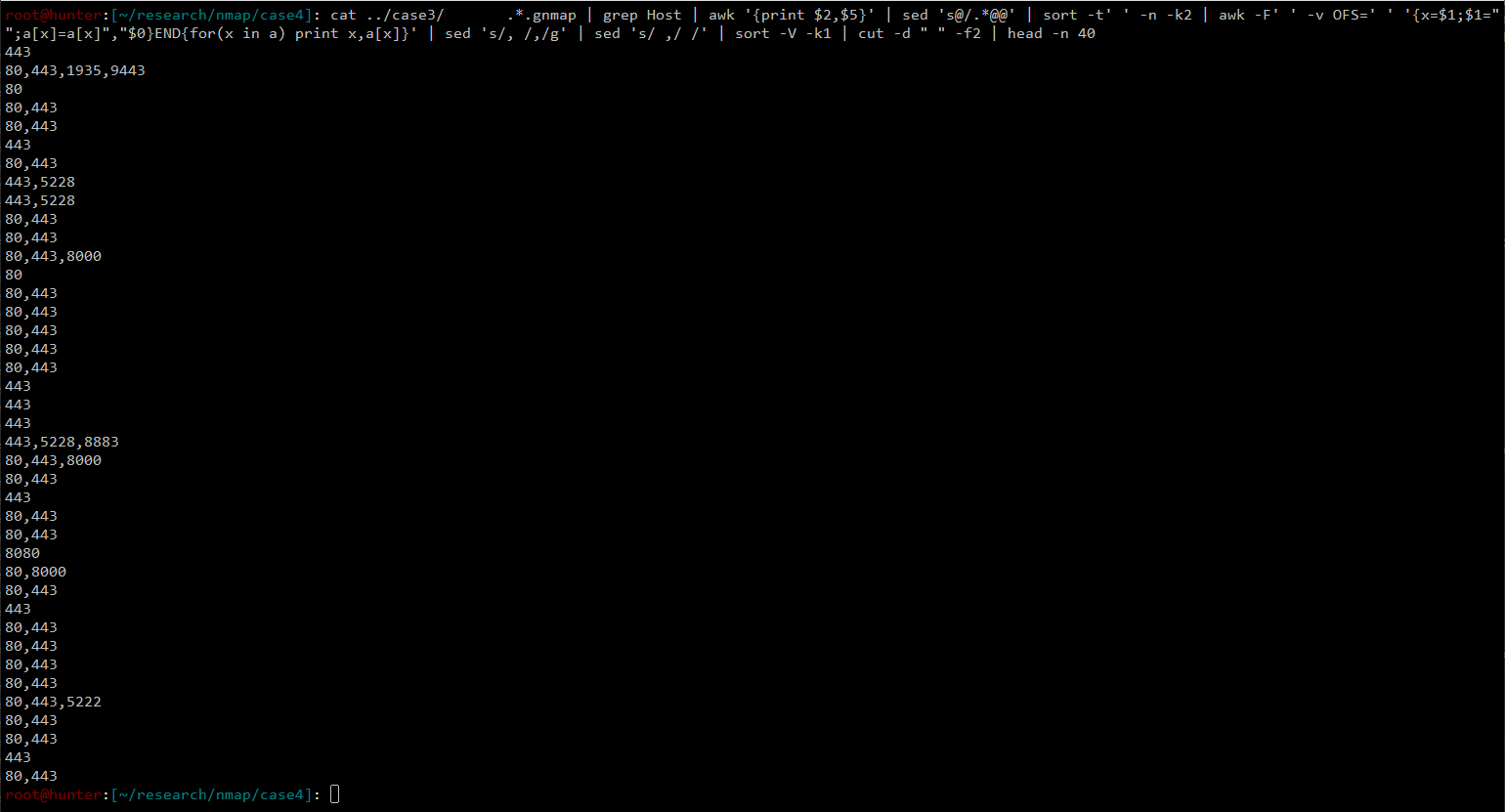 As you can see, the output is different from the command used in Test Case #3. Instead of combining all the open ports, we created a list of all open ports found from each host.

These two lists were then used as inputs to parallel, using the option ::::, to run simultaneous Nmap scans.

Again, if you’re not familiar with GNU Parallel, please take a look at this tutorial.

This is an example of what happens, based on the two images above, when the above parallel command was executed to initiate simultaneous scans.

The following image shows a snippet of what happened when the test case was executed. As seen below, 10 concurrent Nmap scans are running using parallel. 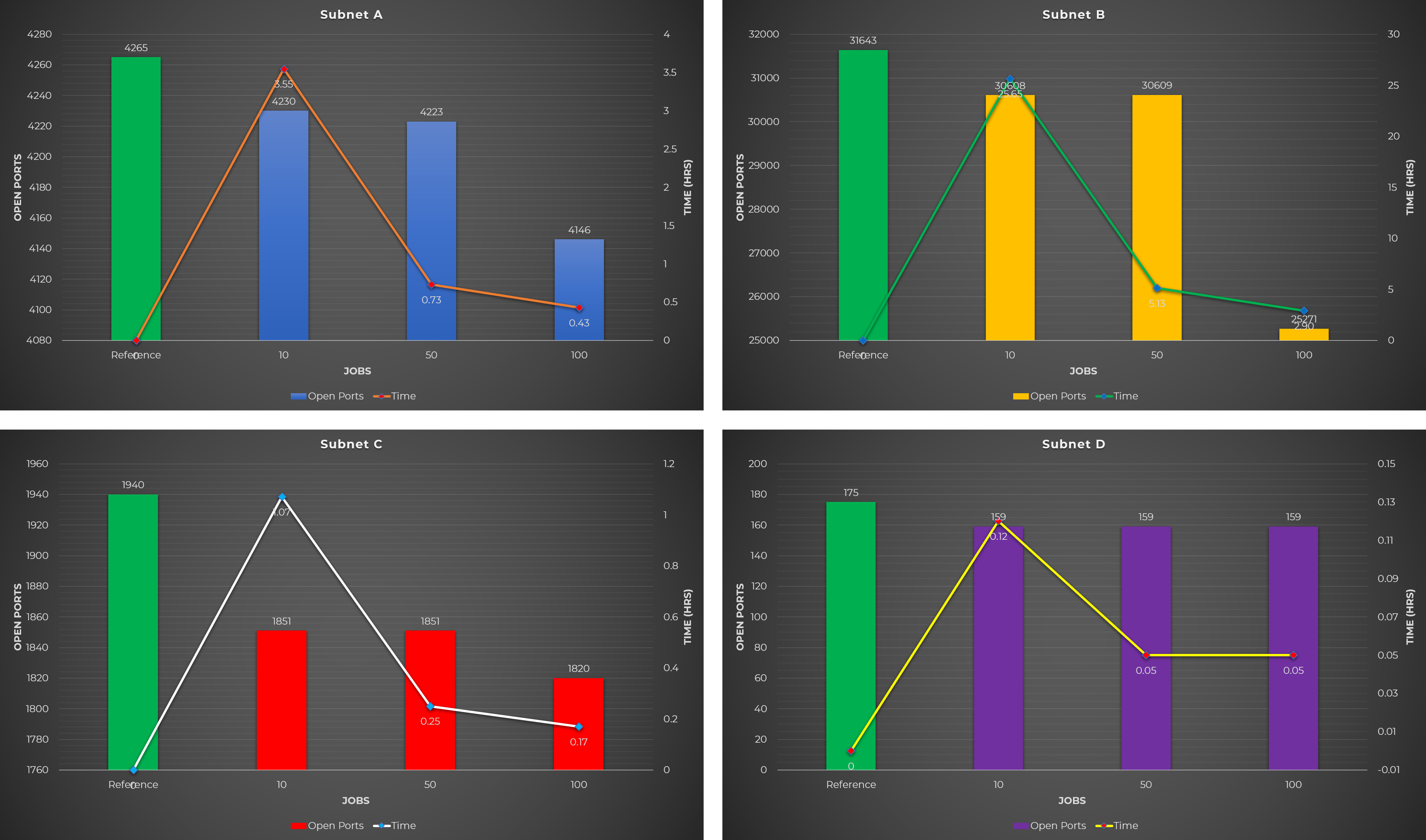 The following table shows the raw data from the experiments performed using the different Nmap test cases mentioned above.

Based on the results with the experiments performed with Nmap, the following were concluded:

Based on the results from the test cases conducted for both Masscan and Nmap, the following are recommended to obtain a balanced approach between speed and accuracy during an Internet-wide port scanning:

For both tools, the following precautions should be taken as they will result into fewer open ports being detected:

While this research provided an approach on how to balance the speed and accuracy during an Internet-wide port scanning, readers should not take the conclusions here as 100% reliable. Several factors were not included during the research due to limited time and budget. Most notably, the use of only one IP address during the entire research period was not a good setup. Since I was scanning the same target networks for several times, it is possible that the scanning machine’s IP address got blacklisted somehow which can cause inconsistencies with the number of open ports being detected.

Please revisit the Scope and Limitations section as it provides a good insight on some of the factors that might affect the result of this research.

« OffSec Certs - Are They Still Worth the Money? Asset Enumeration: Expanding a Target's Attack Surface »