All the lessons I’m sharing here are based on what I learned/observed during my experiment.

AntiScan.Me has always been my choice to check how my implant fares against different AV software/companies. The main reason is they never distribute the scan results (well, at least that’s what they claim) compared to VirusTotal.

Checking the detection (evasion) rate of my implant helps improve my maldev skills. It also forces me to learn and research different evasion techniques which I find challenging and fun. But recently, I got stuck trying to get a 0/26 detection rate. Here’s an image showing the detection rate of the implant that I have written. 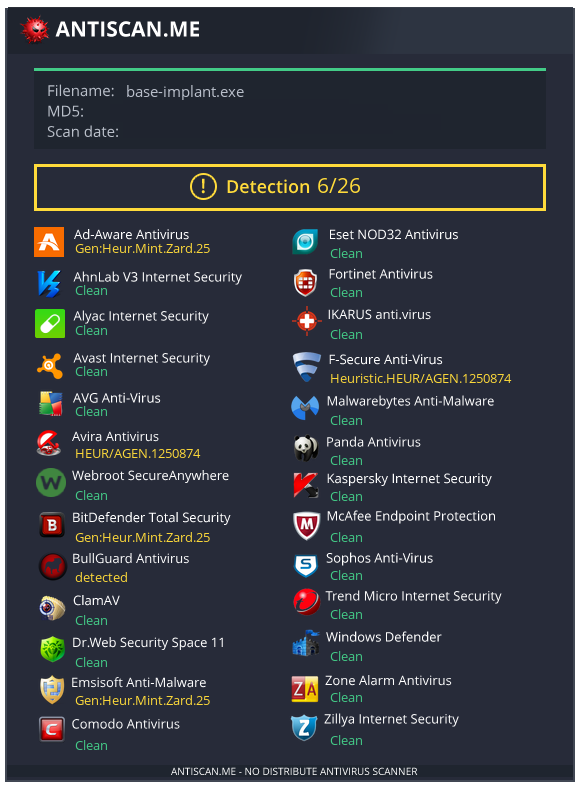 I’m quite happy with the result though since the majority of the AV products failed to detect it. But, I’m not satisfied so I keep thinking and trying different ways to improve the detection rate. After several attempts and testing, nothing worked and the detection rate remains the same. After doing some research, I came across Code Signing to make my binary look “trusted” (even though it should not be trusted as it’s actually doing malicious things). I don’t want to spend a dime purchasing a valid code signing certificate so I opted to use an invalid/spoofed certificate.

The cert.pfx file used from the above command was derived from a certificate and key created from the www.microsoft.com domain.

Here’s what the signed implant looks like and it is clearly shown that it was signed with an invalid certificate. 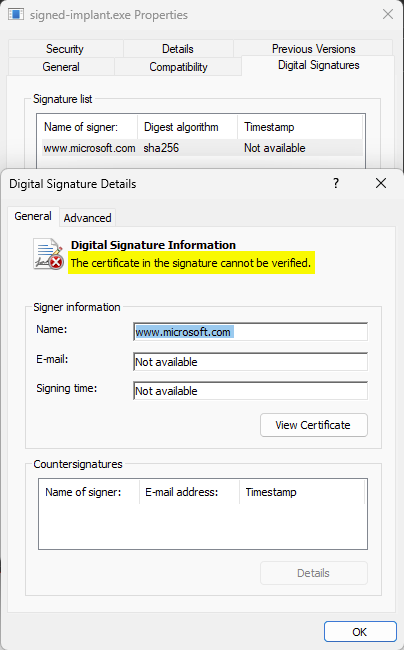 Based on the scan result, the detection rate improved from 6/26 to 3/26. This signifies that code signing works (or simply fools some AVs) even with an invalid certificate. 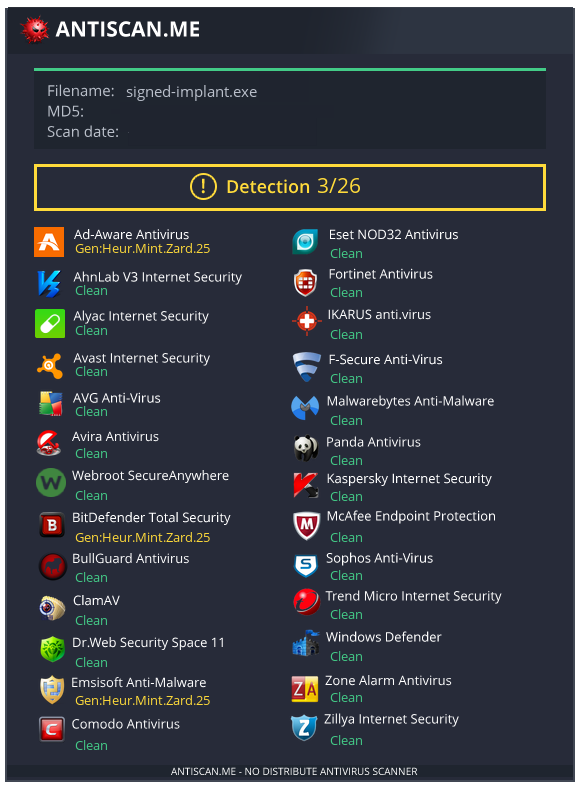 LESSON #1: Signed binaries are less investigated by some AV software. This means using a spoofed/invalid certificate works because there are AVs that don’t verify the validity of the digital certificate used.

Obsessed with improving the detection rate, I decided to time-stamp my signed implant, using http://timestamp.digicert.com as the Time Stamp Authority (TSA) server, to make it more “trusted” and “verified”? 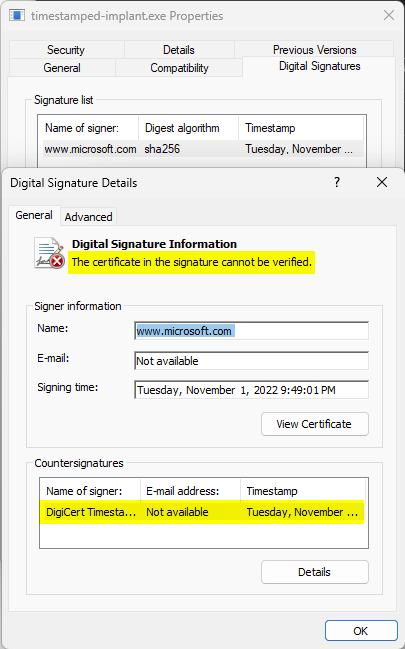 Did I get a better result? I’m quite disappointed because nothing changed and the detection rate stays at 3/26. 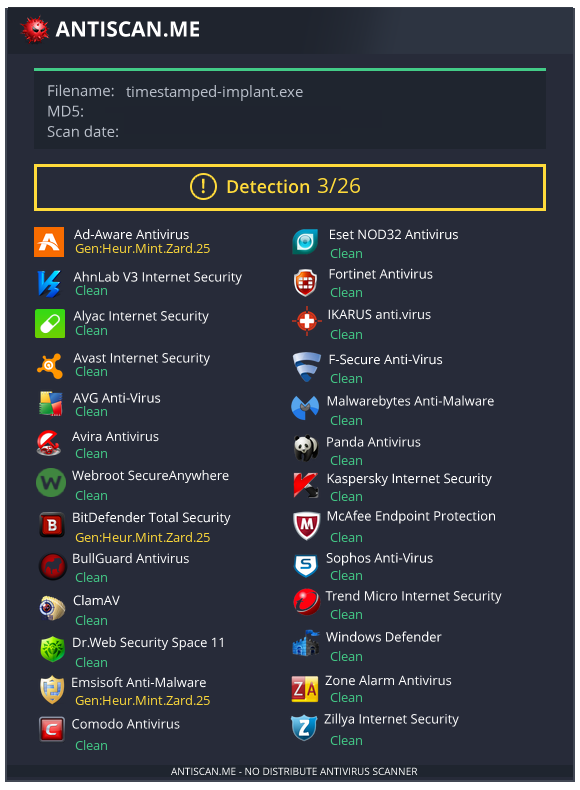 My disappointment did not stop me so I keep on thinking and trying different methods. Out of curiosity, I decided to change the TSA server and used http://sha256timestamp.ws.symantec.com/sha256/timestamp instead. 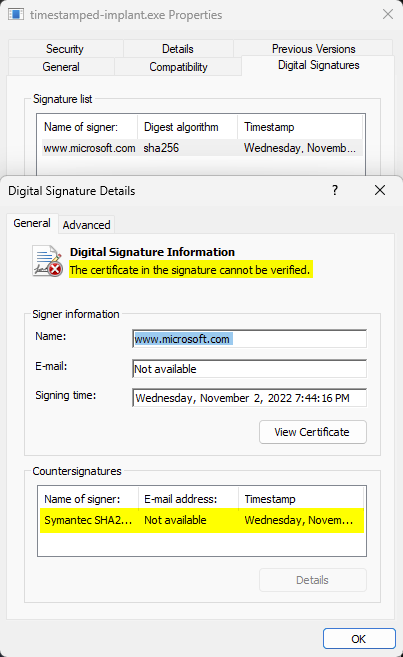 Surprisingly, it worked and I now achieved the detection rate that I wanted! 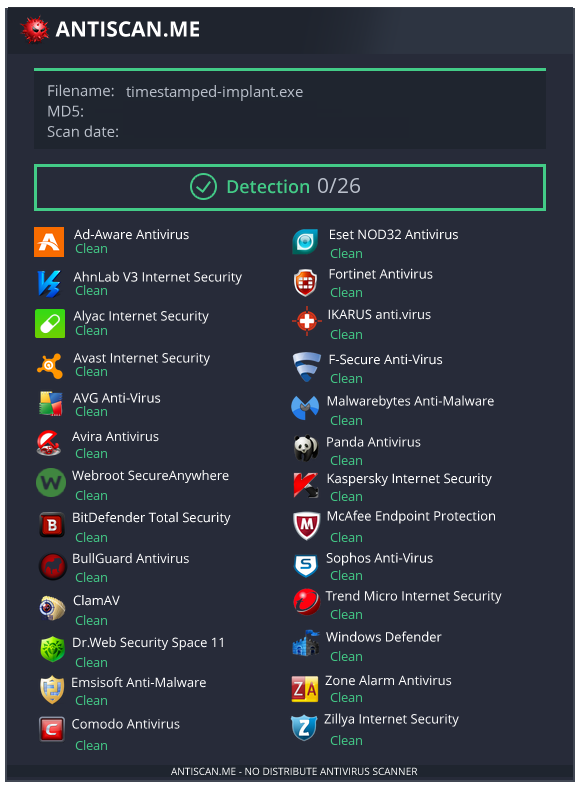 LESSON #2: AV products behave differently depending on the TSA server used to time-stamp the binary.

Now that I got what I wanted, it’s time to celebrate! Well… NO! Because as soon as my implant touches the disk of my target system (Windows 11 with up-to-date Windows Defender engine), it is caught immediately. 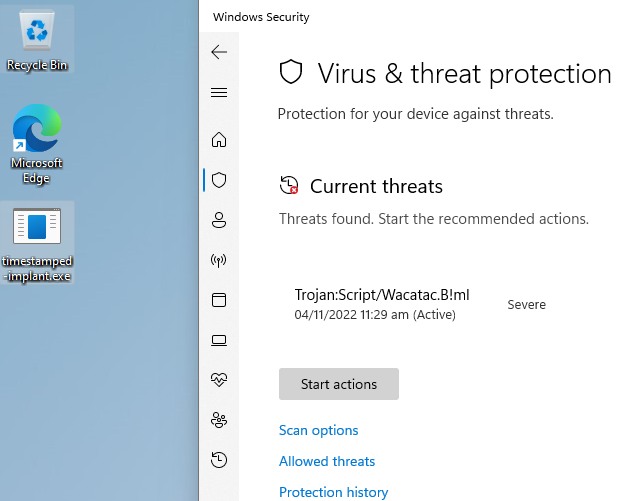 How did Windows Defender flag my implant when AntiScan.Me told me I got a 0/26 detection rate? How is that possible? I don’t even know how to answer my questions because I don’t have an idea how the different AV products within AntiScan.Me actually works!

LESSON #3: Don’t fully rely on online AV scanning tools/websites. While these online services make life easier since we can test our binary on different AV vendors and get the results at once, nothing beats testing your implant on a local and isolated machine. 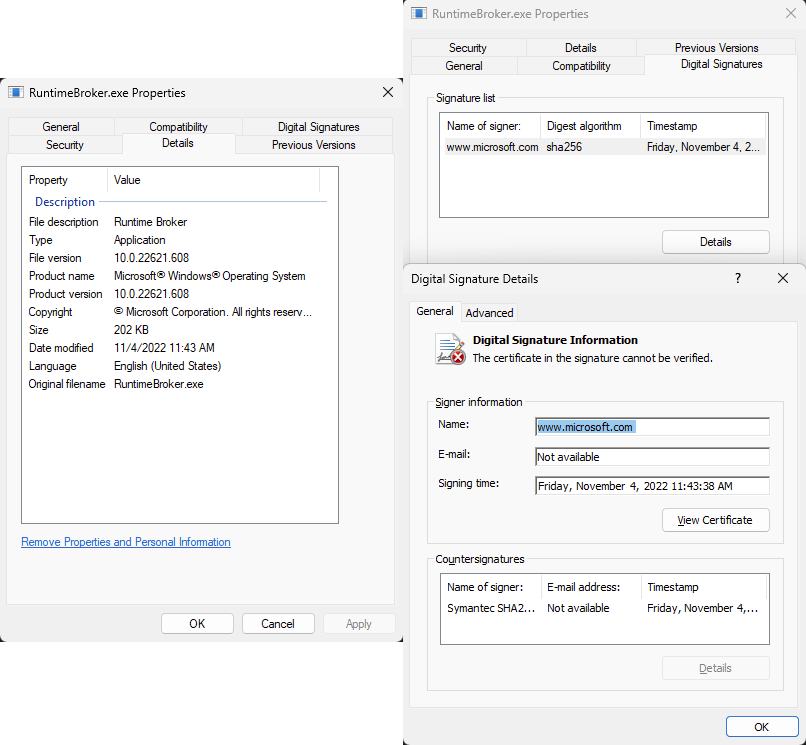 I was very hopeful it will work but sadly, Windows Defender detected it as soon as it touches the disk. 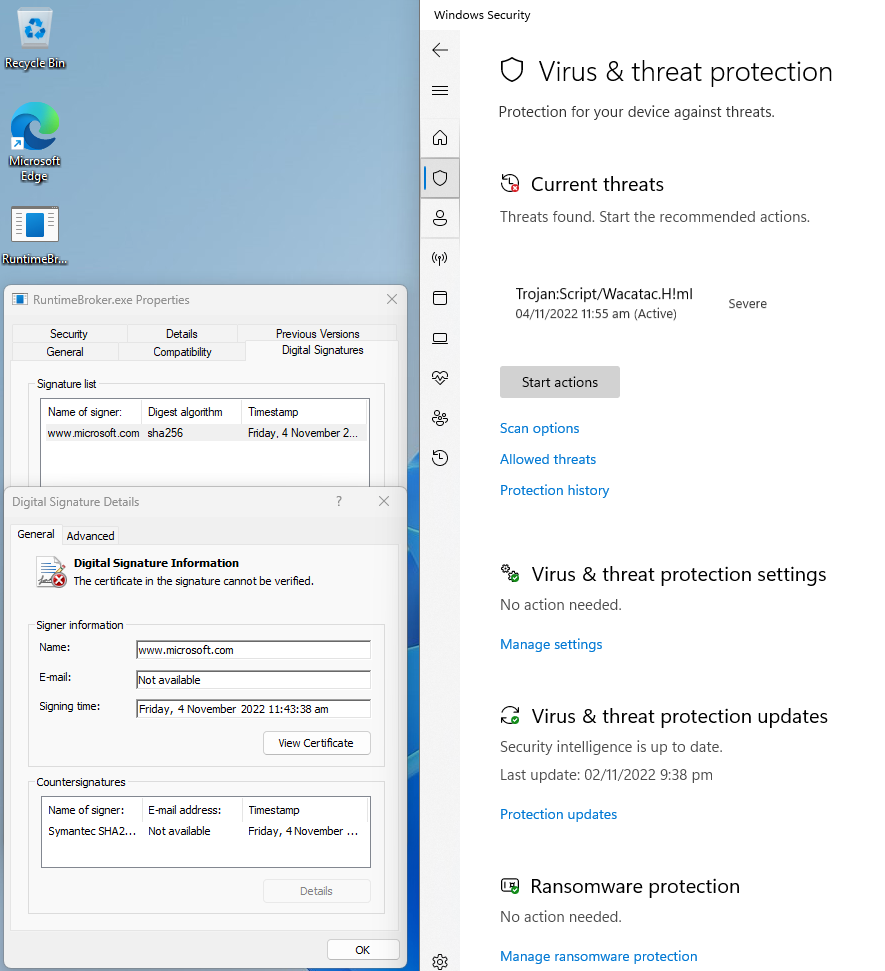 Maybe it was detected because I spoofed a Microsoft domain to sign a cloned Microsoft binary, and Windows Defender could easily verify the authenticity of the certificate and the binary since Microsoft owned them. Maybe, maybe not. Who knows?

As a further investigation, I tried cloning only the file attributes of RuntimeBroker.exe but did not sign it. And the result is still the same. 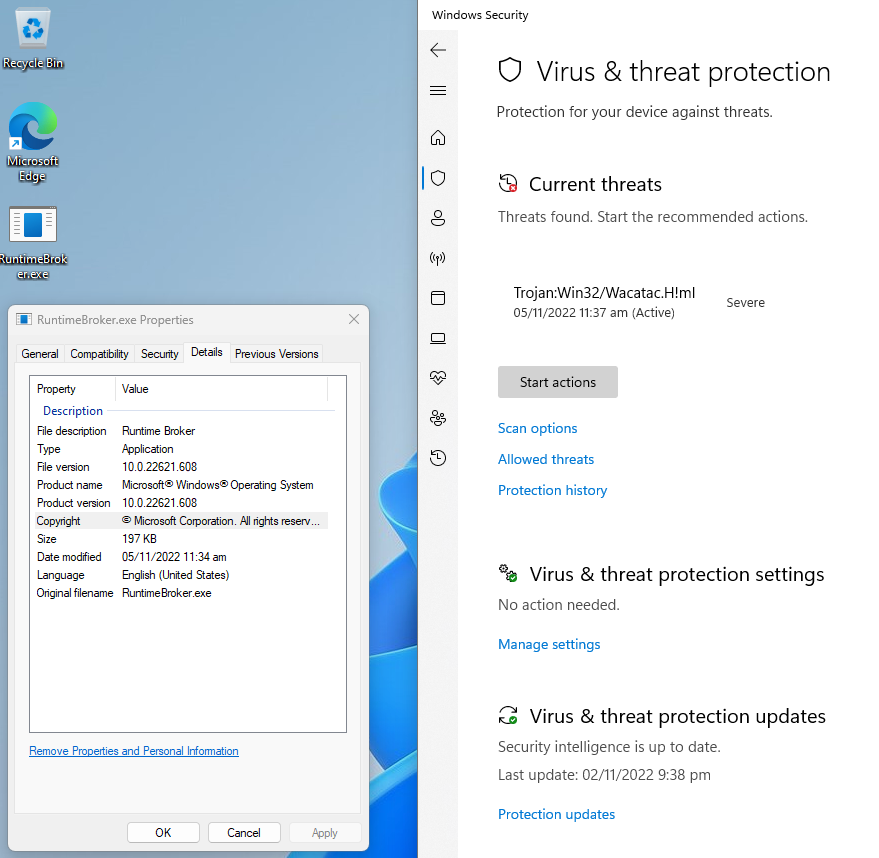 I already expected this to happen though since the original and legit copy of RuntimeBroker.exe is signed by Microsoft. 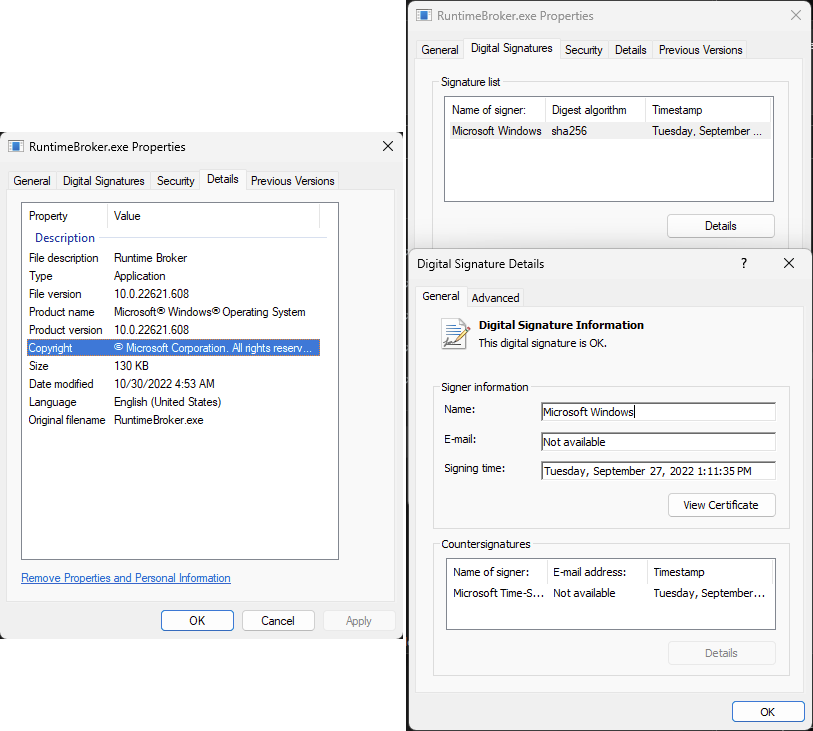 But what if I clone the file attributes of an unsigned Windows binary? This time, I opted to clone C:\Windows\System32\at.exe and did not bother signing it since the original/legit copy is not signed. As soon as my implant touches the disk, Windows Defender did not detect it. Even when executed and the shell was received, Windows Defender also failed.

LESSON #5: Being able to download and execute your implant undetected does not necessarily mean the job is done and you won’t get caught. So don’t forget to implement some in-memory evasion techniques.

After spending some time with this experiment and trying to achieve what I wanted (0 detection rate), I realized an important lesson (at least for me).

LESSON #8: No detection does not mean no alert/notification will be sent to the blue team.

LESSON #9: Signing an implant with a spoofed certificate might have LEGAL consequences. Do it at your own risk and be responsible.

That’s it for this post. Again, these are my opinions which are based on what I have observed during my experiment. There’s no guarantee that you’ll see the same observations and that all lessons shared here will work in your environment and all scenarios.