In my previous post, I made a comparison between the different well-known and open-source root-detection bypass tools for Android. In that post, I encouraged analysts to learn how to reverse engineer an application and bypass an application’s protection manually.

This post is a follow up on how to bypass the different checks used by RootBeer library by changing the application’s process through code manipulation.

Before you could modify an application’s code, you first need to have a copy of the APK file. After downloading the application (RootBeer Sample) from the Play Store, the following series of commands can be used to extract the APK file from the Android device.

If you’re like me and do not like typing series of commands, the easiest way to retrieve an APK file from a device is by using Frida Android Helper.

Once you have a copy of the APK file, decompile it using apktool.

Tip 1: Sometimes, rebuilding a decompiled application results in an error. One way to fix that error is by removing the file 1.apk (highlighted above) before rebuilding the app.

Tip 2: If an error related to “resources” shows during the building process, try excluding the resources during the decompilation by using the -r flag (shown below).

Reading smali code is not as easy as reading java code. So if you’re not comfortable with smali, you can open the APK file in jadx-gui to view its java equivalent and use it as a reference to gain better understanding. 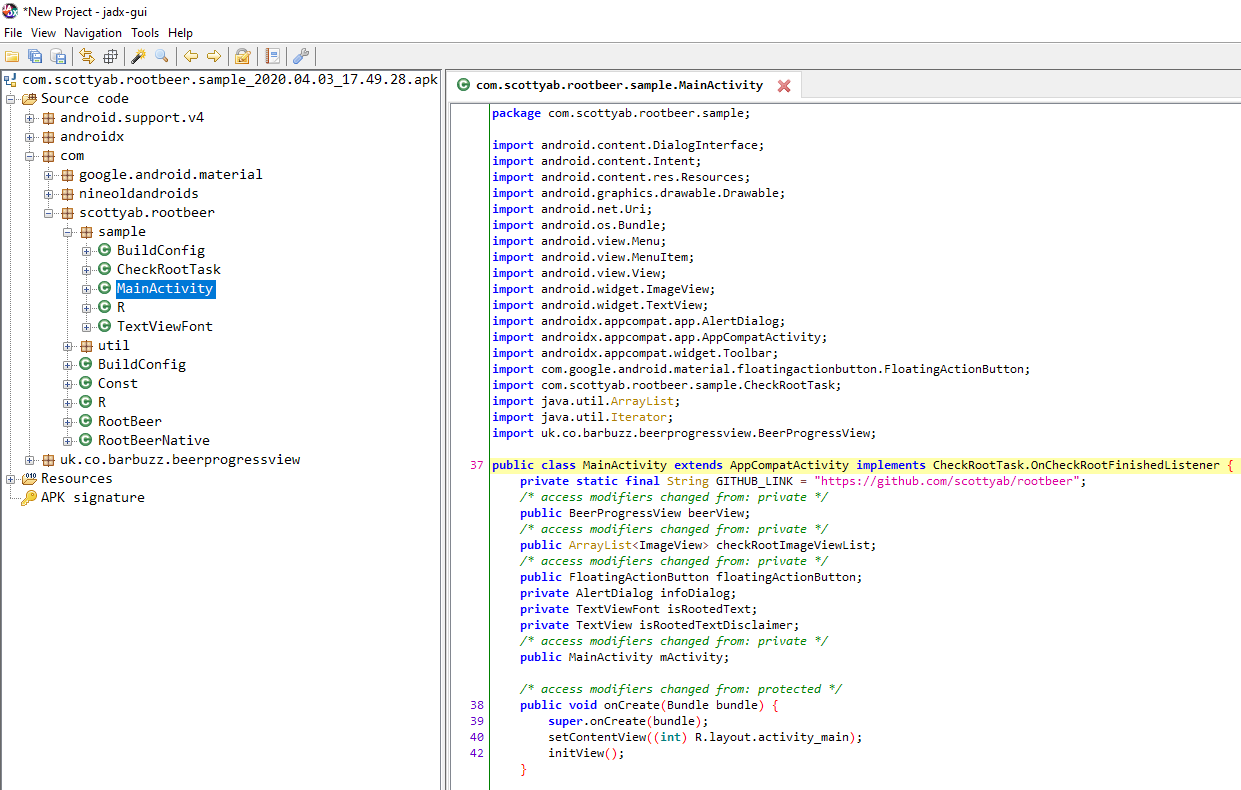 Looking at the RootBeer (com.scottyab.rootbeer.RootBeer) class, there exists a function called isRooted() which, as per its name, is responsible for identifying whether the device is rooted.

The equivalent smali code of this class is located in /decompiled/smali/com/scottyab/rootber/RootBeer.smali. From this smali code, the isRooted() function is located on line 1084 (as shown below).

After doing the necessary changes, rebuild the application using apktool. 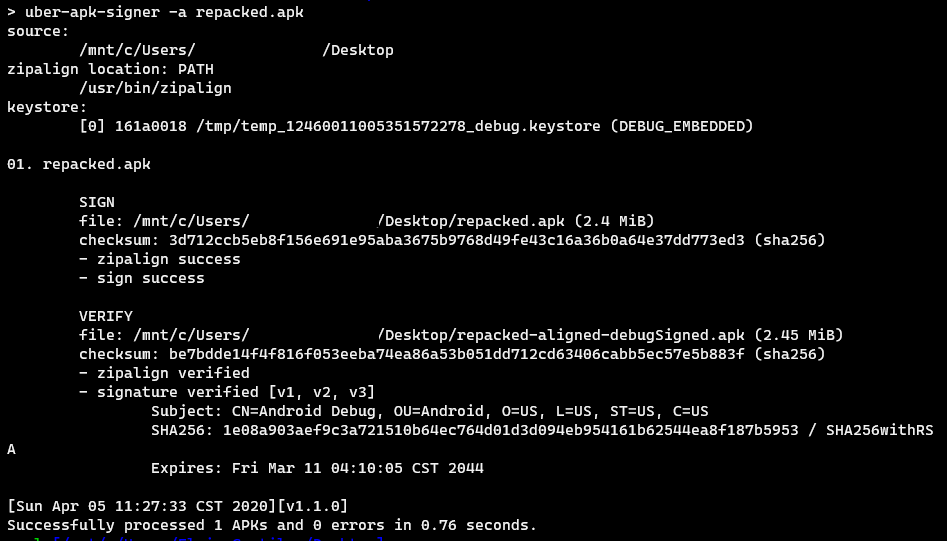 Using the modified application, it can be seen that we’ve successfully forced the result to “NOT ROOTED” (see the right image below). However, nothing changed with the different checks used by RootBeer; some of the checks still failed. 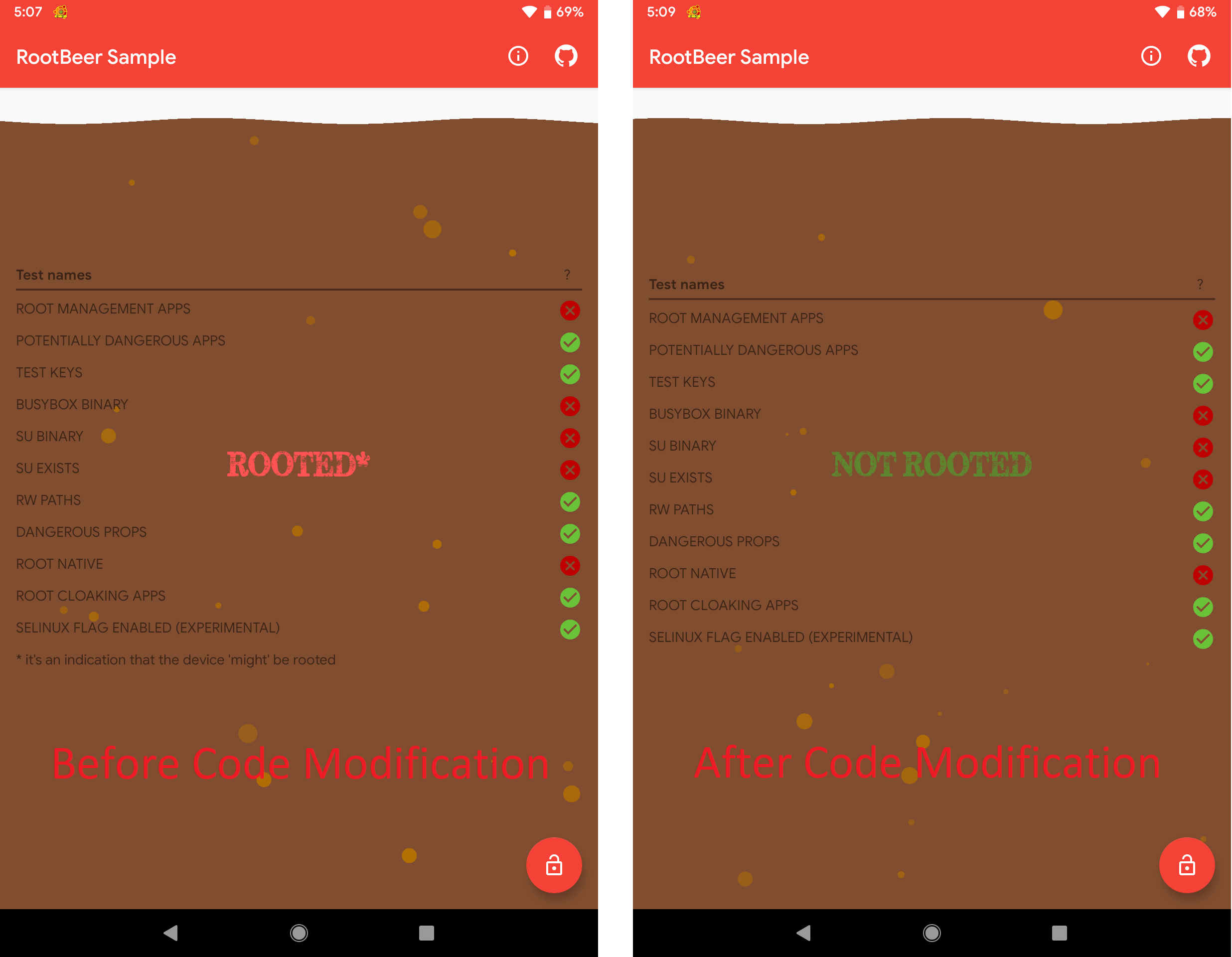 This happened because we only modified one function of the application and forced it to return as “NOT ROOTED”. To pass all the checks used by the RootBeer library, we need to modify and bypass all the relevant functions.

So how can we find all these functions? If we look at the RootCheckTask (com.scottyab.rootbeer.sample.CheckRootTask) class, there’s a function called doInBackground() which can be used to identify the different functions/checks used by RootBeer. This list of functions can be used as a reference to determine which smali code/files to modify. 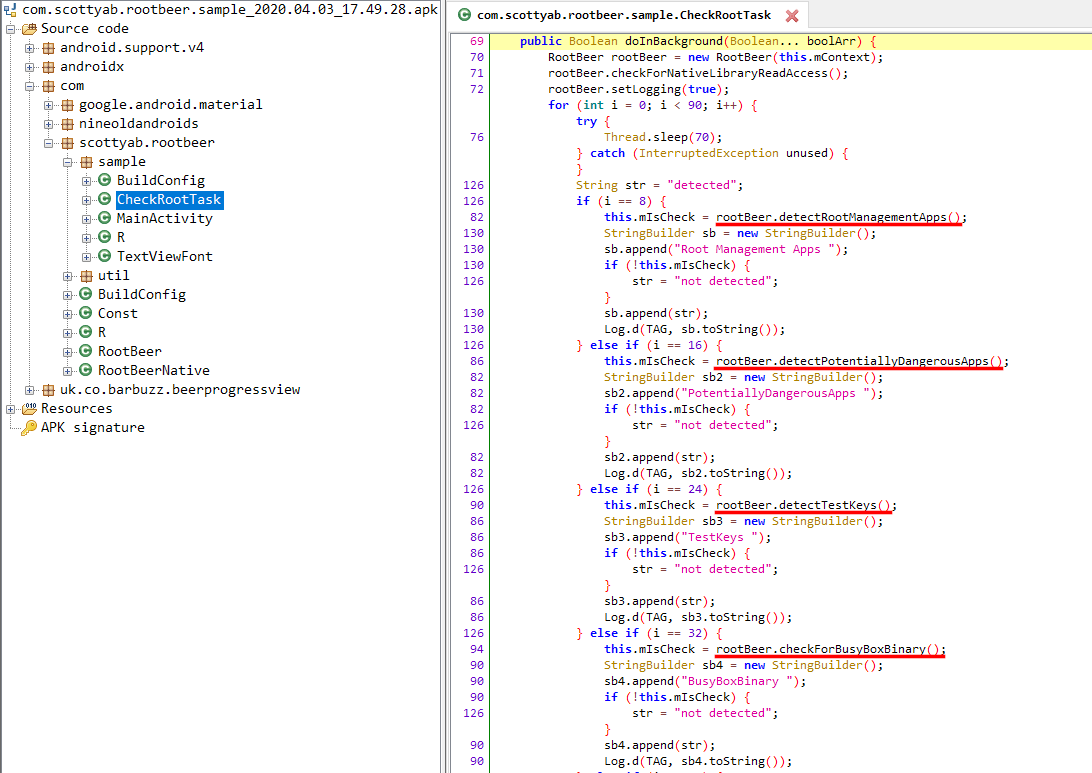 The following lists the changes that were made to the relevant classes and functions to bypass all of RootBeer’s checks.

Note: bold text in the code snippets below signifies the changes that were made.

After doing the above changes, the last thing to do is to rebuild, resign, and re-install the modified application. 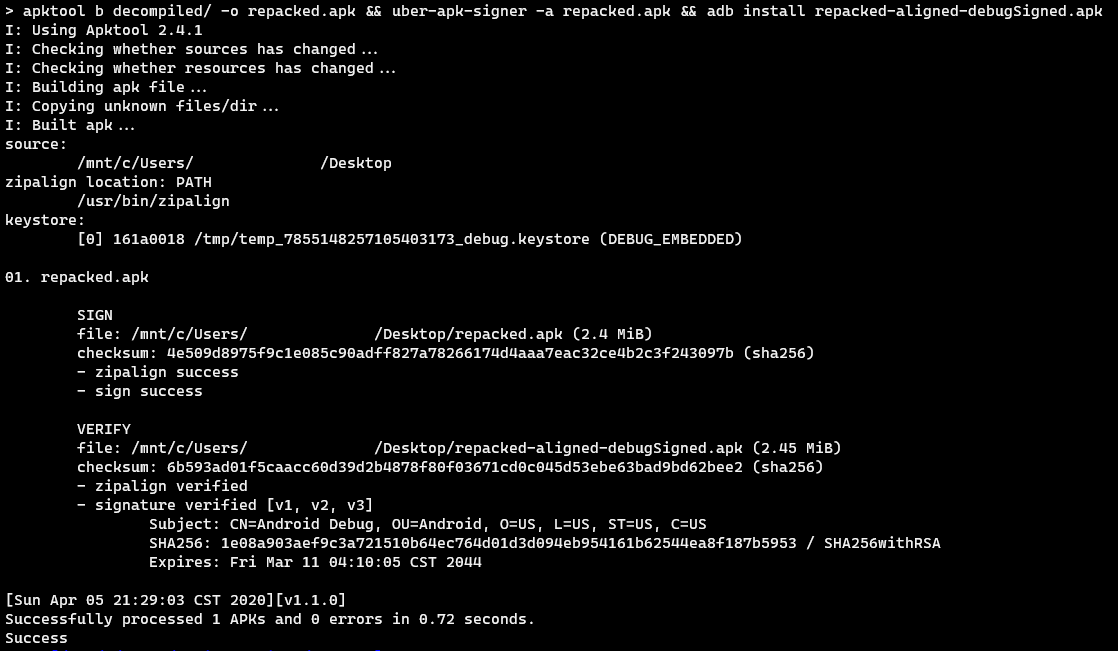 Though the process of modifying the application’s code took quite some time, it’s worth the effort as it resulted in all the checks being bypassed. 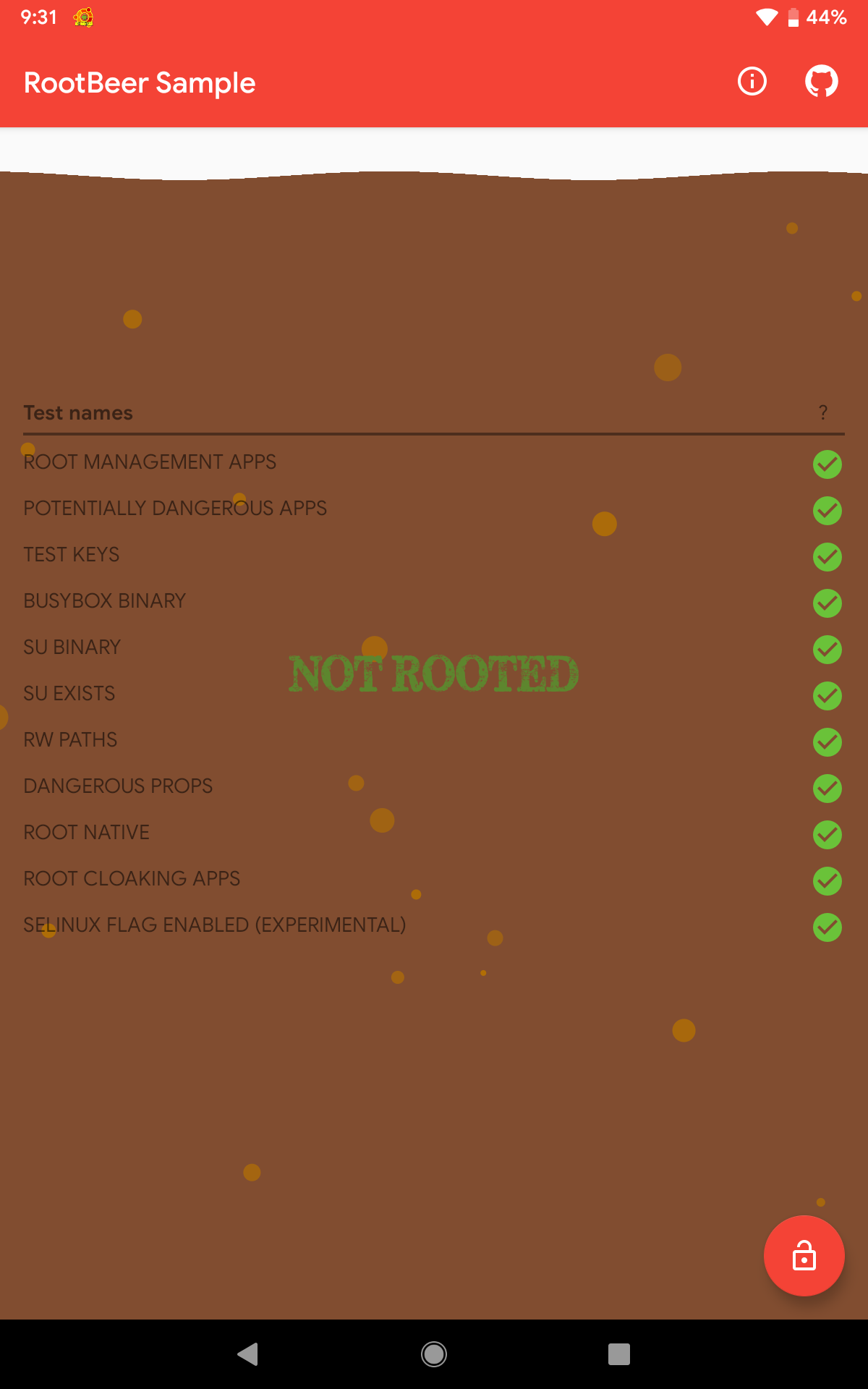 The way I modified the application’s code (e.g., inserting return v0 after a few lines of the beginning of a function) is not the only way to do it. We all think differently and each of us could come up with different ways on how to solve a problem. So it doesn’t matter how you do your modifications as long as you’re getting the results that you’re aiming for.